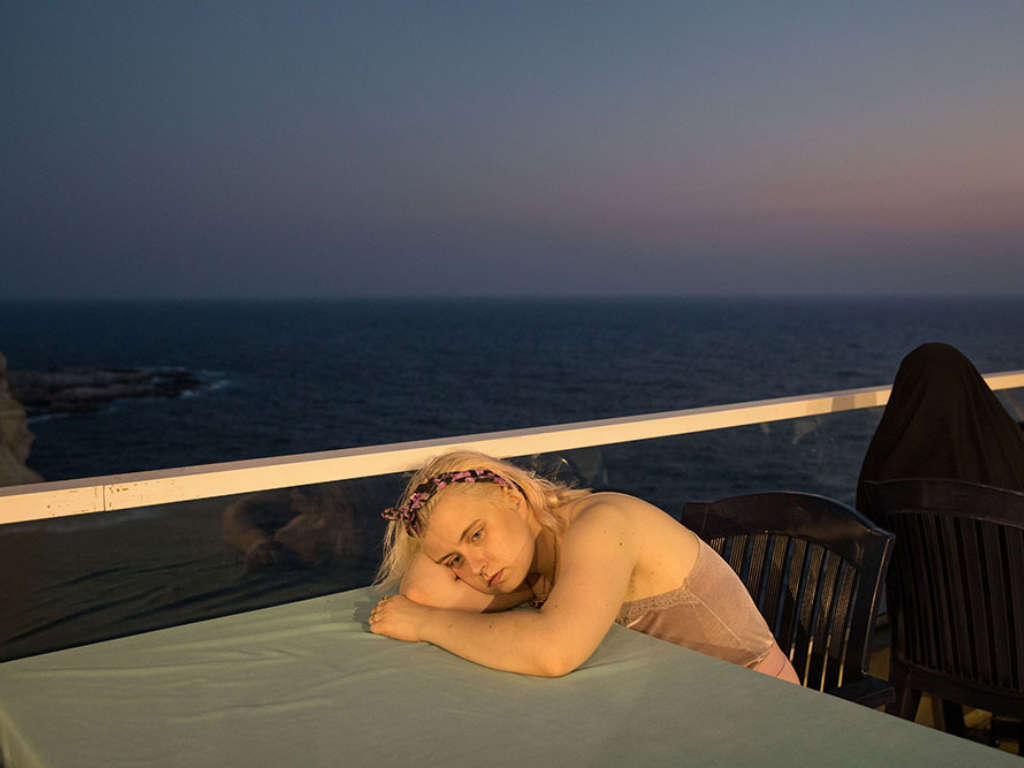 How close can a photographer get to the people they portray? What is their role with regards to their subject, and what responsibility do they assume? Bieke Depoorter’s artistic work is based on her relationships with people and her own position as a photographer. From November 22, 2019 to February 16, 2020, the NRW-Forum Düsseldorf is showing the most comprehensive solo exhibition to date of the Belgian Magnum photographer’s work in Germany. Comprising five series from 2015 to 2019, the exhibition presents the photographer, who was born in Belgium in 1986, as an artist at a turning point in her career.

Depoorter explores current social issues and questions her role as a photographer, as well as the limits of her medium, across five topical projects, some of which are ongoing. The points of departure are often chance encounters with people, some of whom she then accompanies for years, exploring how and whether one can capture a person through the means of photography, as well as how to achieve true collaboration. Her various journeys have taken her to Egypt, the USA, France, Norway, and Lebanon.

The exhibition begins with works from 2015, shortly before Bieke Depoorter was named as the youngest photographer to become a full member of the renowned photographers’ agency, Magnum Photos at that time. It illustrates how her working methods changed dramatically during this period and continue to change to this day. Night and moments in which nobody seems to be watching remain her central themes. Today, however, the focus is increasingly on aesthetic, ethical, and social questions, as well as Depoorter’s never-ending search for answers. The current series represent the artist’s exploration of the intrinsic essence of her work and a search for her role as a photographer, as well as for dialogue and cooperation with the people she portrays. As a photographer she increasingly sees herself as an outsider, but also as an artist searching for ways to bridge the gap between her and the people she photographs. It is often these joint narratives of the photographer and her subjects that ultimately form the works.

With the multimedia installation Sète#15 (2015), a nocturnal journey through the French port city, and the short film Dvalemodus (2017), Depoorter begins to project her own narratives onto other people’s reality. She visits people and photographs them in their actual private environment. She fictionalizes their representation through elements of her own story, blurring the boundary between the world of others and her own. The photography festival ImageSingulières invited her to create work during a short residency in the coastal town of Sète in the south of France. She wandered through the streets at night but couldn’t bring herself to take photographs, because she increasingly had the uncomfortable feeling that she was looking at people in order to use them. She finally managed to take photographs by imagining the inhabitants as protagonists in a story with their own surroundings as the backdrop. Dvalemodus is Bieke Depoorter’s first short film, which was co-directed by Mattias De Craene and released in 2017. The film was shot in 2015 during a three-week winter residency on the isolated island of Senja in northern Norway. Darkness prevails in this region during the winter months and is an essential element in Dvalemodus, which means “hibernation” in Norwegian. As she did in Sète#15, Depoorter viewed the inhabitants of the village, in this case Skaland, as the protagonists of a narrative in which fiction and documentary seamlessly merge.

Bieke Depoorter has been traveling to Egypt regularly since the beginning of the revolution in 2011 for the series As It May Be, trying to find trust in these times of turmoil and suspicion, where private life is especially cherished. She asked people she met by chance if she could spend the night at their homes. Women, their husbands, and their children all shared their daily life, their food, and even their bed with her. These connections are truly important to Depoorter. Nevertheless, she became increasingly aware of her status as an outsider, both culturally and as a photographer. In 2017, she revisited the country with the first draft of this book and invited others to write comments directly onto the photographs. This resulted in contrasting views on country, religion, society, and photography from people who would otherwise probably never have encountered each other. As It May Be depicts a population in transition, full of integrity, commitment, and respect.

The ongoing series Agata began in the same year. Depoorter met the young performer in a strip club in Paris. A complex relationship developed between the two, resulting in a whole series of portraits. The work is based on a collaborative working dynamic and the agreement to “use each other.” Agata is playing with and searching for her identity while Depoorter is questioning photographic authorship. The portraits are a product of them both, of a complex relationship between photographer and subject. Recently, new questions have arisen as their relationship has evolved. Does photography define their friendship? How can you photograph someone without putting yourself above them? What responsibility does she have as a friend and as a photographer? The two women continue to travel together and visit each other to this day. New collaborative portraits are constantly being created that tell a collaborative story and in which the demands and extremes of real artistic collaboration become visible. Together, the two explore the boundaries of illusion and truth and the complex relationships between self and other.

The series Michael is an almost detective work, which is still ongoing. Depoorter met Michael in Portland, Oregon in 2015. He gave her three suitcases full of collages and scraps of writing and then disappeared without a trace. To this day, she continues to search for him and to try to understand his life. In new installations, she works through her current examination of his disappearance and its traces. She also worked with her brother, the media artist Dries Depoorter, on a chapter of this work for the exhibition at the NRW-Forum.

Bieke Depoorter was born in Kortrijk, Belgium in 1986. She studied photography at the Royal Academy of Fine Arts in Ghent, where she graduated with a Master's degree in 2009. Three years later, at the age of only 25, she was nominated by Magnum Photos and elected a full member in 2016. Depoorter has received several awards and honors, including the Magnum Expression Award, the Larry Sultan Award, and the Prix Levallois. She has published four books: Ou Menya, I am About to Call it a Day, As it May Be, and Sète#15. For the publication of the books she worked with Aperture, Editions Xavier Barral, Edition Patrick Frey, Lannoo, Hannibal, and Le bec en l'air.

The exhibition was curated by Joachim Naudts for FOMU, a photography museum in Antwerp, Belgium, where it was on display to February 10, 2019. The exhibition captures the special moment where a photographer presents herself from a new perspective and reveals the ongoing process of her artistic development.

The image material listed is freely usable in the case of thematic reporting and provided that the specified Fotocredits are cited. The free right of use expires at the end of the exhibition (22.11.2019 to 16.02.2020).